The form becomes function, the past becomes future.

Efesto Antefatto is Portus Naonis Watches launch clock: a tribute to the founder’s grandfather, Paolo Brisotto. The uncompromising design is aimed at enhancing the value of the Multi-faceted Dodecagonal bezel? which finds its first use in this exclusive timepiece. 20+ 5 numbered pieces have been produced in limited series.

There is no identical Efesto Antefatto. Each watch is the result of the combined customization process between its new owner and us.

To define and refine the simplicity of the geometric shapes of Efesto, sanding, glazing and polishing alternate each other.
The strap with the typical PNW cut is hand-made with leathers* and threads chosen by the customer.

The experience in precision mechanics has led us to insert our logo at the tail of the second hand. It’s thickness is only 6 tenths of a millimetre.

Height and flare of the bezel together with the aesthetics finishes are completely configurable. 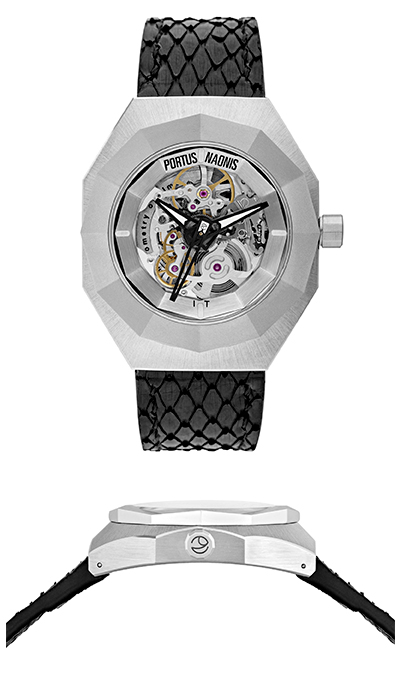 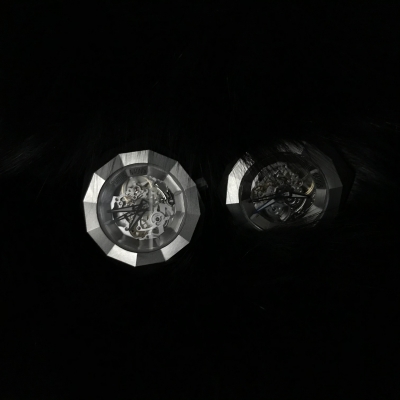 “Everything started from a drawing I made during a trip to Rome. The idea was to deprive the watch from everything that was not necessary.
I started to convince myself that the solution lied in the reinterpretation of the structural part to make it more functional based on my needs. I didn’t want a dial but at the same time I didn’t want to give up the workability and easiness in reading time. So I focused on the bezel and before arriving at the station “Roma Termini” the drawing was done.
I thought about a dodecagonal bezel, that wasn’t only aesthetic, like in every watch I knew, but that exploited the magic of the twelve sides and corners, because they would have substituted the hours and minutes. Nevertheless it wasn’t sufficient: the corners needed to be emphasized, so I thought about it for a while, because simple incisions wouldn’t have paid off, until looking at the hands of the girl sitting in front of me, I noticed the diamond cut of the stone set in her ring, which gave me the idea.”

“The project was born in order to create a watch that satisfied my needs. To avoid compromising the quality, my conception of the movement of the watch had to be absolutely mechanical, absolutely automatic and Swiss, in the absence of a true Italian calibre.
So, after a long research, I found a young, well-structured company from Ticino that produces movements with high-level configurations and finishes. Specifically, the mechanism I chose for Efesto, is a skeleton customized product and carved purposely for us, which allowed me to eliminate the dial, pursuing the desire to concentrate all the functions on the multi-faceted dodecagonal bezel®.” 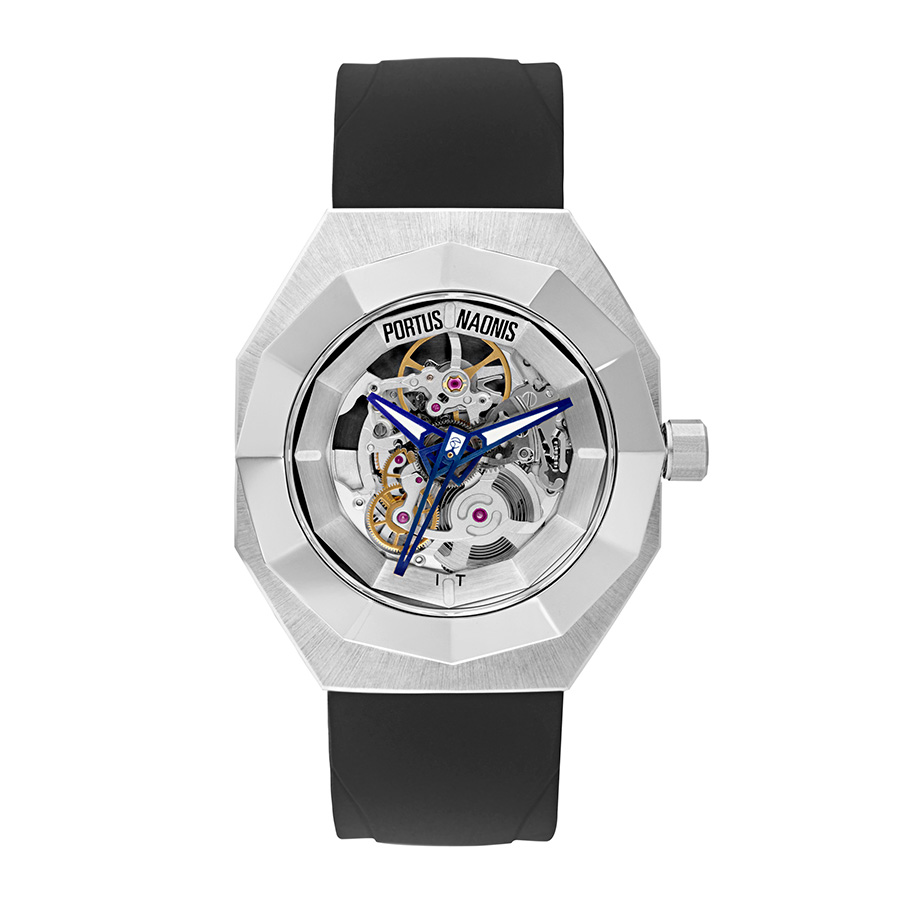 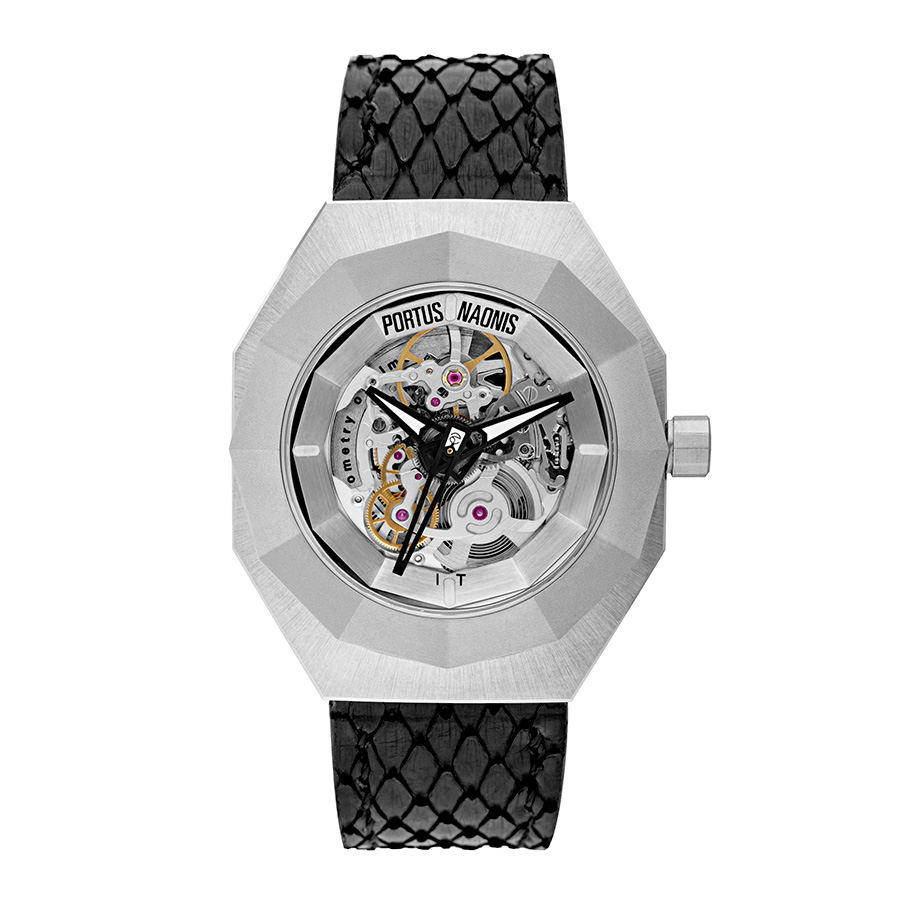 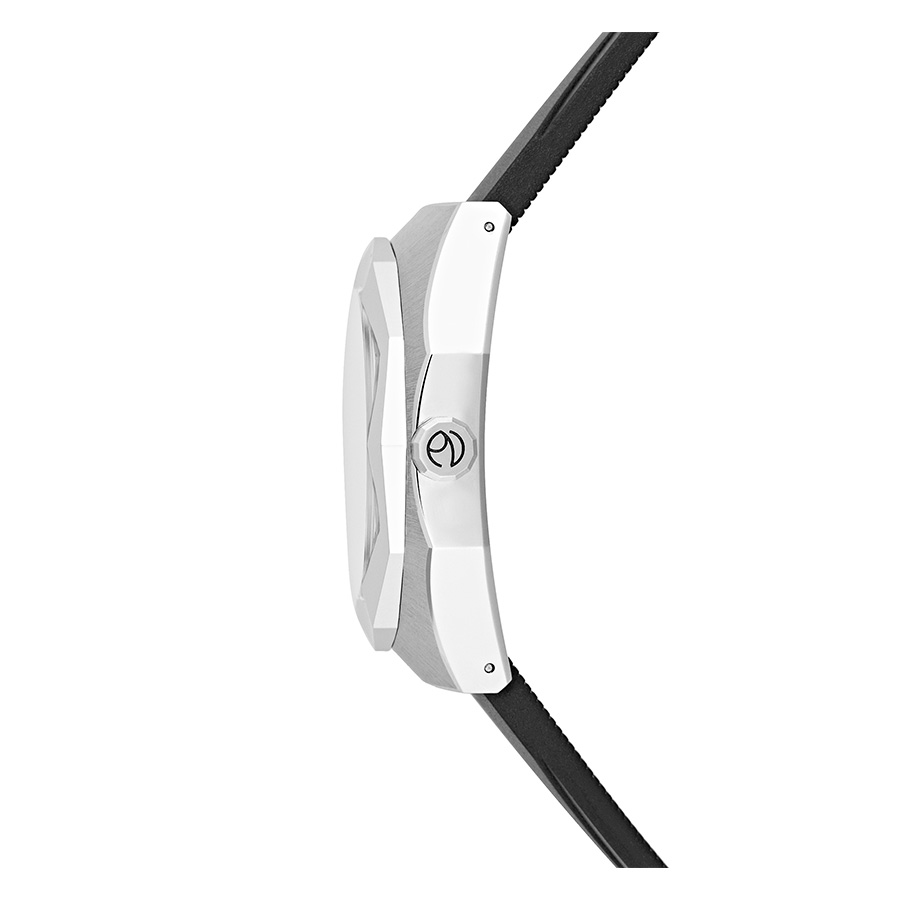 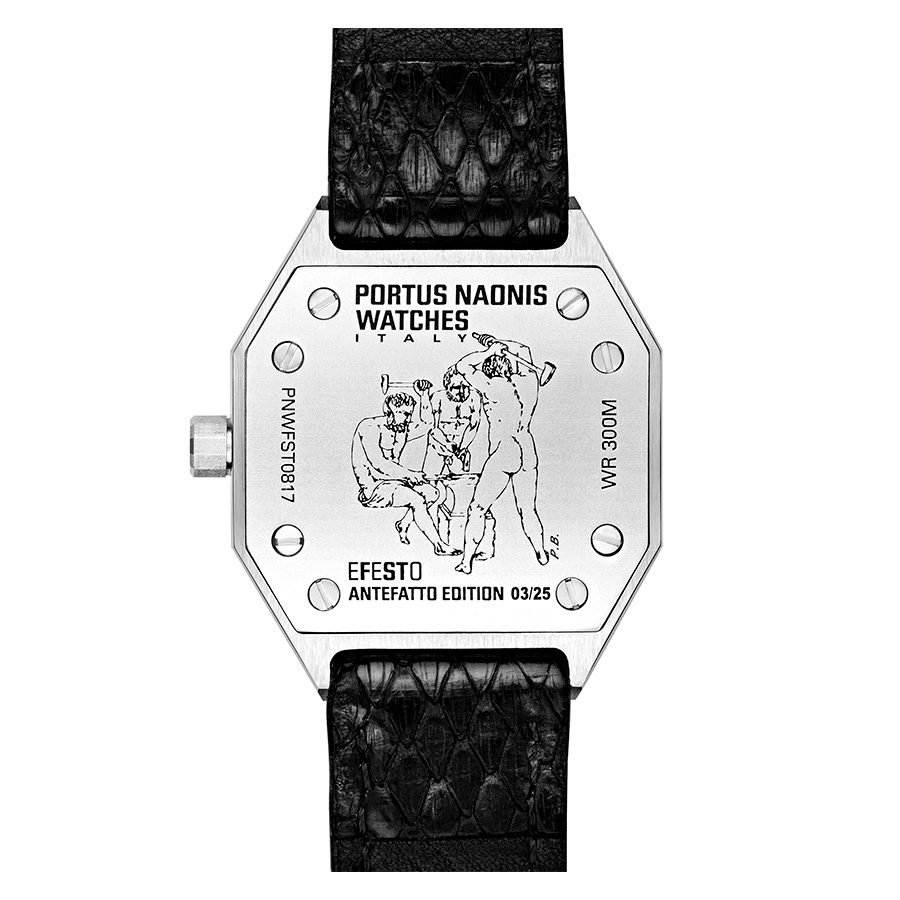 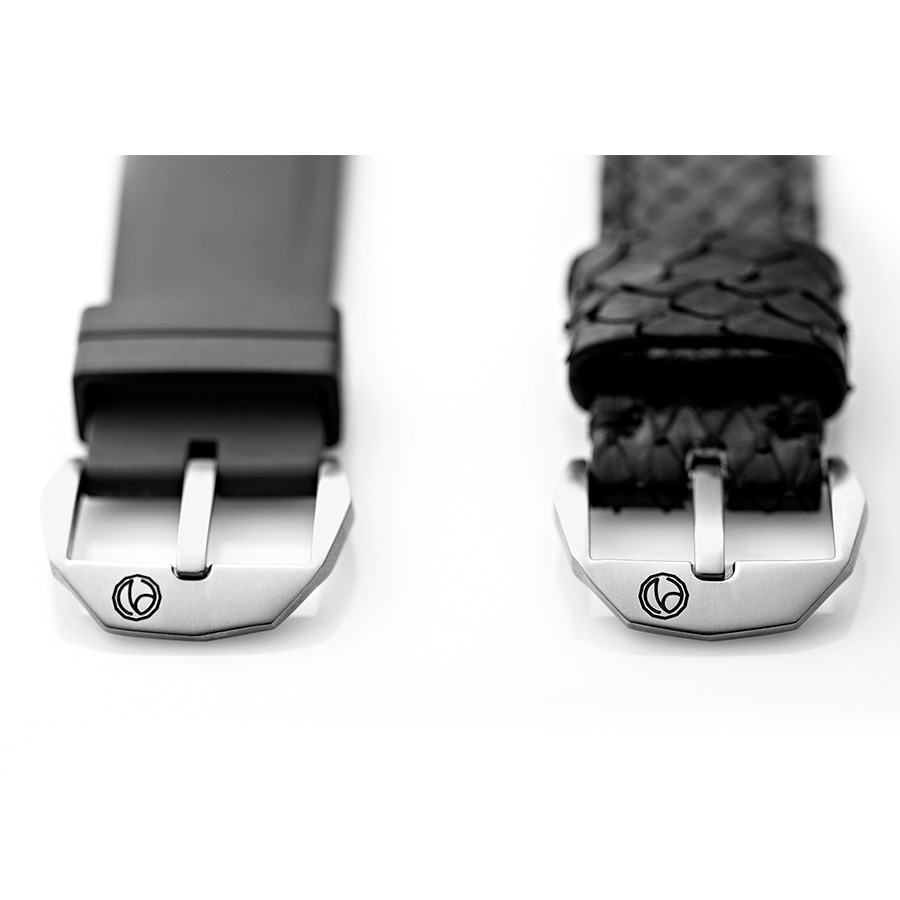 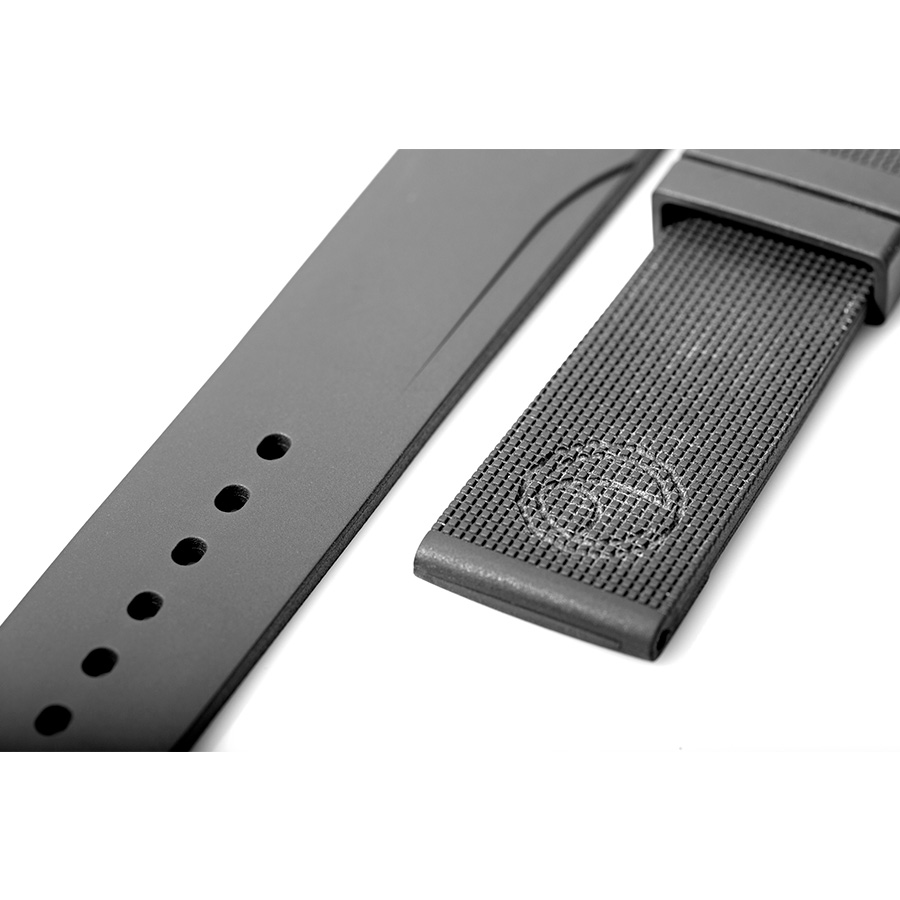 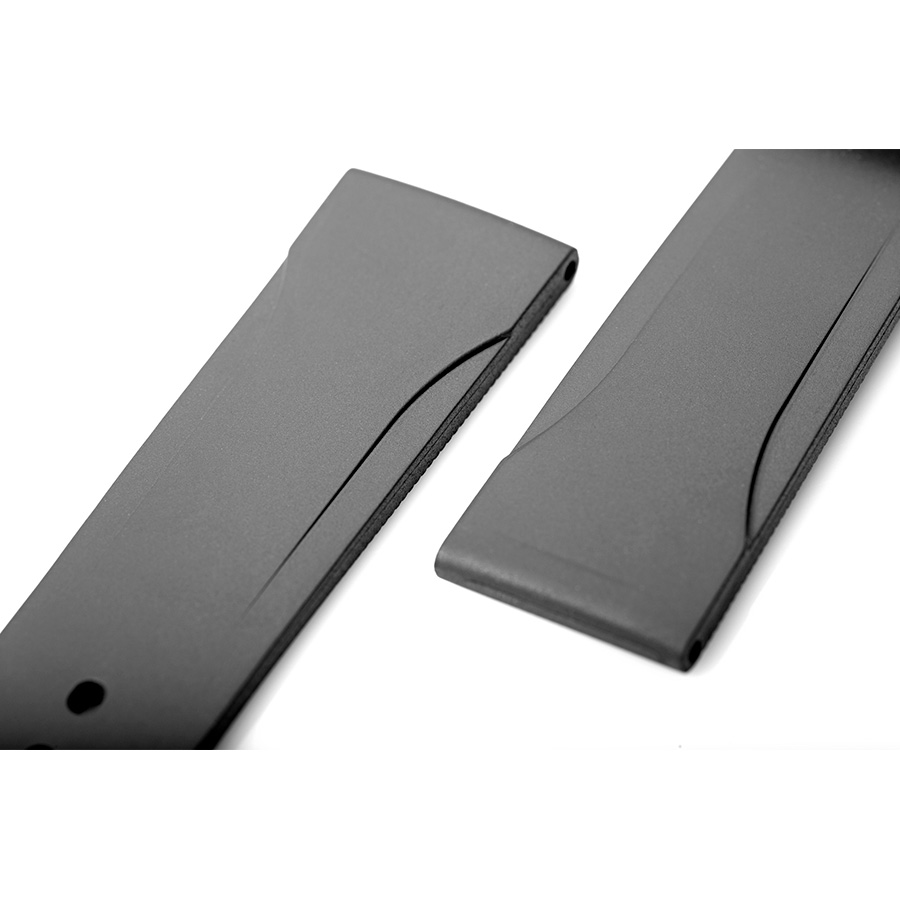 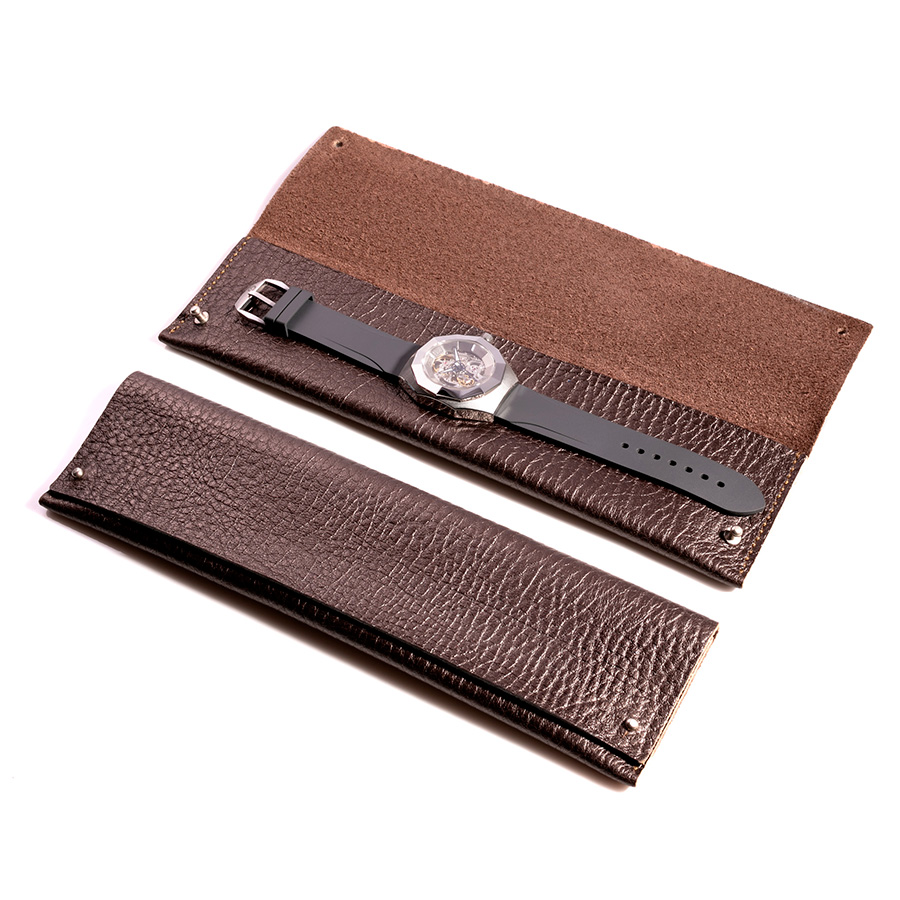 The grandfather of the creator of the brand was a blacksmith. This terminology by itself in Italian means an iron-smith (the master of iron). Nevertheless in Latin, language from which the word derives, faber is usually followed by a second vocabulary that defines both the material processed (faber aerarius; argentarius; eborarius; ferrarius) and the type of labour (faber lectarius; pectinarius; sigillararius). When the word is used by itself it referes to faber tignarius, a carpenter, only later the faber (ferrarius) became known as the blacksmith as we intend still today.
The various meanings, as well as the importance of the job due to the increase use of iron became a determinating factor that the word “fabbro” became, in different forms, a common last name (Italian, Fabri, Fabbri, Fabris, Favretto, Fauro, etc.; French, Fabre, Favre, Febvre, Fèbre, Lefebvre, Lefèvre; German, Schmed, Schmidt, Schmitt, etc.; English Smith).

The significance of iron, it’s introduction in a relatively recent era and its complex manufacture led people to believe that blacksmith were extremely wise and that they even had magical powers. The god of blacksmith, craftsmen, artisans, and sculptors who has the ability to extract metal from the mineral is the same god of fire: EFESTO. Thus the name of the first model.